The Role of Speed Development in Ice Hockey

I would like to welcome a guest article from Cedric Unholz. Cedric is currently a Strength & Conditioning Coach with the Buffalo Sabres (NHL) and Rochester Americans (AHL). Prior to working in professional Ice Hockey, his roles included being the Lead S&C for Munster Rugby’s Academy in Ireland, as well as working in the NCAA (Simon Fraser University, Canada) and professional/international Rugby with the Scottish Rugby Union. Cedric can be followed on Twitter @CedricUnholz

The importance of acceleration and high velocity sprinting abilities are recognized as indispensable components of athletic development and competition preparation. Any major field sports and the majority of Track & Field events require high levels of these abilities for elite performance, which more often than not represent a major determinant of successful athletic outcomes. These are often expressed as game defining moments, such as rapidly covering ground on a defensive play to prevent opposition scoring, or accelerating and driving past an opponent to exploit space. In addition to enhancing raw physical output, improvement of these qualities has profound implications with regards to developing general strength and athleticism, and assists to limit injury risk by ensuring appropriate preparation to generate and absorb the forces necessary for high-level performance.

Whilst the significance of specifically targeting this component tends to be accepted and addressed to a larger degree across sports such as American Football, Rugby and Soccer, there still exists a substantial amount of uncertainty surrounding this area in the sport of Ice Hockey. More specifically, the relationship between high velocity skating, dry land speed development, and whether consistent targeted speed work can/should be programmed to help support and improve on-ice performance is often heavily debated.

The above is possibly caused by the large array of off-ice options available in many facilities, but more commonly due to a considerable amount of misunderstanding and apprehension associated with the use of high intensity activities such as sprinting and jumping. More often than not the end result is only minimal amounts of training time/resources being allocated to this area, or it simply being ignored and not assigned any importance at all.

Common reservations around the use of off-ice speed work in ice hockey include the fear of athletes injuring themselves in what are often described as ‘non-functional’ tasks, as well as the misguided belief of interfering with work in sports-specific technical areas. These concerns are unfounded if general speed development (including both on- and off-ice work) is appropriately implemented with thoughtful and progressive training program design. Adaptations in this area are also likely to positively support overall hockey development by enabling the athlete to perform at/repeat higher output levels, recover faster from submaximal efforts, as well as simply be a more physically robust and resilient competitor.

Ice-skating is a unique movement sequence, and whilst it displays notable differences to sprinting on land, it also shares major relevant similarities, particularly to sprint acceleration (Lafontaine, 2007). Even at maximum velocity skating the postures, joint angles and propulsion strategies are remarkably comparable to this phase, particularly at the hips, knees and ankles. 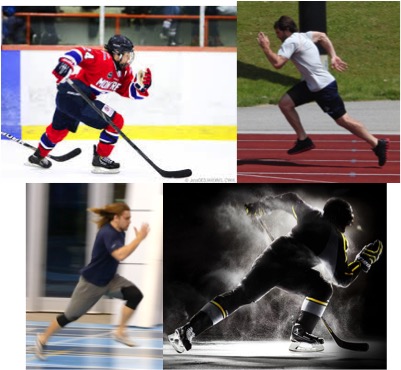 The general mechanics of skating and the interaction of force transfer between the body/ice surfaces via the skate blade are also comparable in this manner. Similar to early stage sprint acceleration, ice-skating is a primarily concentric-force dominant action and utilizes stretch-shortening strategies during major parts of the movement to help increase output (Farlinger 2007). Specifically, it appears that dorsiflexion pre-load at the ankle during contact with the ice prior to finishing a stride, as well as hip complex pre-loading prior to push-off/extension, are key contributing actions just as in accelerating and jumping on land. 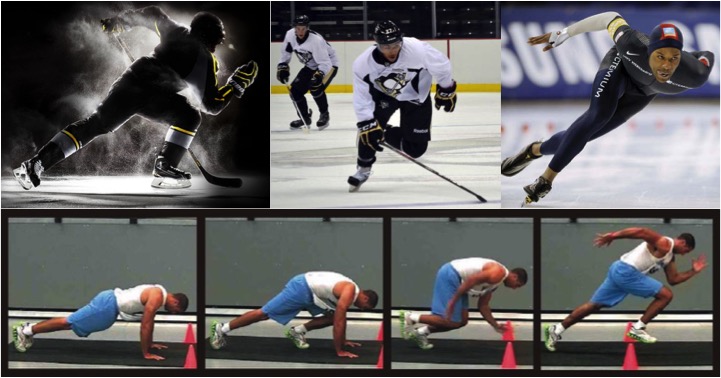 A comparative analysis between the biomechanical profiles of sprinting on the two mediums provides further insight into how off-ice speed development work may transfer to help improve skating performance. In addition, investigating this relationship provides the practitioner with further useful implications for general training design.

Sprinting on land has been shown to create both the highest limb and locomotion velocities achievable by humans, with elite sprinters generating around 70% of their max velocity within the first 6-7 strides of acceleration, and roughly 75% of their ground contact time (GCT) at max velocity by this point as well (Mann, 2015). Based on in-house research (which included on-ice speed testing, video analysis and reviewing the available literature), examining these same parameters for ice-skating presents a very interesting picture.

In skating, GCTs tend to rise as velocity increases (Behm, 2005). This allows the athlete to apply force for as long as possible, as well as utilize the unique nature of the gliding phase to aid propulsion at or approaching higher velocities. The fastest skaters appear to reach a greater relative percentage of their max velocity within the first 6-7 strides (ca. 90% and greater for the vast majority of players), and also display significantly longer GCTs at top speed (anywhere from .48-.57sec compared to ca. 0.085-0.1sec in elite sprinters).

During acceleration phases there exists an inverse relationship between the two; in sprinting a top-end athlete’s GCT is roughly 0.185 (first step after the initial block push) to 0.13sec (end of acceleration), whereas a skater’s GCTs in this phase can range from 0.28-0.5sec. As is readily apparent, the contact times in land-based sprinting are therefore significantly lower than those found in skating for the most part, regardless of phase (Behm, 2005; Mann, 2015).

Taking the above information together, it becomes clear that off-ice speed development work can play a substantial role in supporting and improving ice-skating performance (Daehlin, 2016; Felser, 2016). Relative outputs in most land-based speed/jump activities are significantly faster/higher than what is encountered on the ice, particularly in terms of limb velocities, force production profiles and GCTs.

By extension, positive adaptations that readily transfer to skating performance can be made both centrally and peripherally through the use of high-quality, appropriately progressed speed development work. These adaptations help build an athlete’s reserve in key physical areas such as speed, strength and elasticity, and directly improve the ability to produce and recover from high-intensity efforts (Malisoux, 2006; Buchheit, 2014; Daehlin, 2016).

It is also important to highlight that off-ice speed work does not need to be performed over long distances to achieve the stimulus required for relevant adaptation. As outlined, the majority of acceleration demands and velocity requirements are reached within a few number of strides in ice-skating. This not only suggests that sprint distances can be kept short (e.g. 10-15m) for the majority of, if not all, training phases – it also means simpler planning options, less facility space demands, and greater training safety especially for those initially unaccustomed to running. 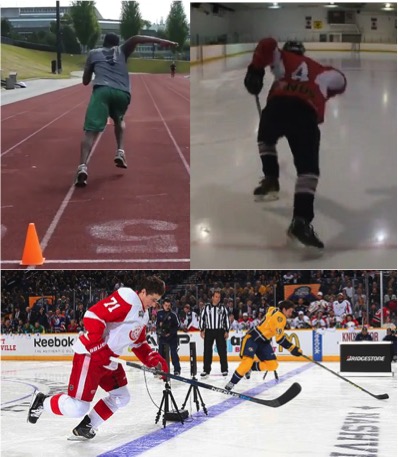 Finally, implementation of speed development for ice hockey is likely to be more effective if not restricted to off-ice modalities only. There is substantial value in incorporating on-ice accelerations to the overall training plan to help facilitate the transfer from off-ice work, and complement hockey practice itself. Even small amounts of consistently performed, high quality on-ice accelerations with appropriate rest periods allows the development of speed qualities using the specific movement sequences and firing patterns inherent to the sport in a maximal output setting. This helps to further develop the aforementioned physical qualities and reserves that contribute directly to performance. In addition, this is an excellent and time-efficient way to help appropriately condition relevant specific musculature (e.g. the groins and hip flexors) to tolerate the necessary forces, velocities, and muscular coordination patterns required during competition.

Farlinger, C. K. (2008). The Effect of Sequence of Skating-Specific Training on Skating Performance. International Journal of Sports Physiology and Performance , 3 (2), 185-198.