Recovery and Regeneration in Professional Sports: My experience with NBA, NHL, MLS

Since developing the technique of microStretching® in 1995, I have been involved in both the treatment as well as the development and management of the recovery and regeneration programs of numerous professional and elite athletes. I have worked in the National Basketball Association (NBA), the National Hockey League (NHL), Major League Soccer (MLS), as well as both the English Premier and Championship Leagues. 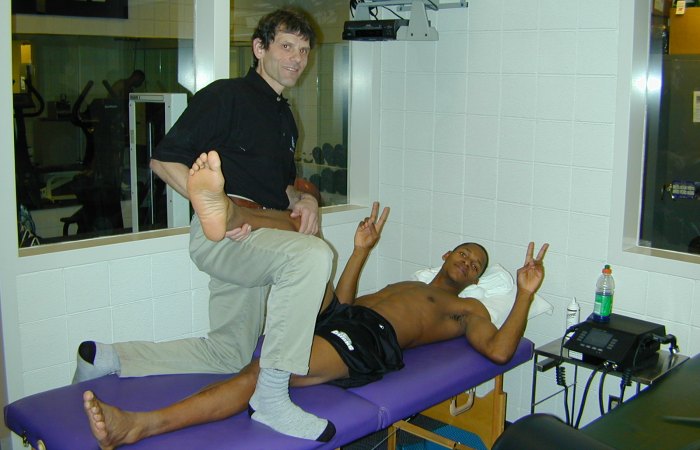 microStretching was developed to specifically address the issue of inflammation associated with injuries. The ability to diminish the impact of inflammation is key to proper recovery and regeneration. However, the shortcomings of several modalities in professional sport continue to reinforce my view that we have yet to develop proper protocols and methods focused solely on recovery and regeneration. In sports, athletes, trainers and the medical staff have relied heavily on the use of non-steroidal anti-inflammatory drugs (NSAIDs) as the primary means of dealing with inflammation. These drugs are seen as the primary means of recovery and regeneration. I have observed their use at the professional and elite level as a prophylactic remedy, as a means of reducing the anticipated pain either during or after the participation in games or practices. This “drug them and send them out to battle” approach is very detrimental: firstly, to the athlete and, subsequently, to their career. Athletes are already damaged goods on many levels. Masking the body’s fundamental mechanism for registering pain and injury only exacerbates this issue. This explains why chronic pain is an epidemic in professional sports. This approach to recovery and regeneration is a reactive approach. Proper recovery and regeneration is proactive in nature, diminishing the effects of chronic pain, and can only be accomplished by paying close attention to inflammation and the inflammatory response.

Read The History of microStretching on SpeedEndurance.com

This medicating of the athlete to enhance their recovery and regeneration in order to maximize their performance has created a drug dependency. A survey of American football players showed that 1 out of 7 high school athletes took NSAIDs daily, with 29% of college athletes taking them as a preventive measure on game day. What is very scary is that athletes have also mentioned that NSAIDs had the potential of improving their performance justifying their daily use. This is understandable since the pain is masked giving one the impression that they were playing and competing pain free but more importantly the false sense that they recovered quickly. Eventually the penny will drop and for the fortunate ones it may result in the premature ending of their careers. For the unfortunate ones it may mean their lives or worse many years of pain and suffering. Therefore, proper recovery and regeneration is not about popping pills!

In addition we also need to question the use of several physical modalities prevalent in professional sport. I am referring to techniques and approaches that predispose the athlete to great pain and discomfort. The International Association for the Study of Pain (IASP) defines pain as “an unpleasant sensory and emotional experience associated with actual or potential tissue damage, or described in terms of such damage”. Therefore what is the reason for subjecting the athlete to pain as a means of recovery and regeneration? I found it very interesting that during my years in these various leagues, I noticed that after these treatments athletes were regularly prescribed NSAIDs. Would it not make more sense to work with the body in a manner that diminishes pain of which inflammation is a byproduct? Proper recovery and regeneration is the tool for achieving this, and until we begin to realize this, preventable chronic pain and injury will continue to be part of sport! When treating the professional and elite athletes, I would have them abstain from using NSAIDS. This was done in order to gain a better understanding of how the tissue responded to microStretching. If the athlete was “juiced up” on NSAIDS it was a lot easier to overstretch and not obtain appropriate feedback from the athlete. Even though with microStretching this would not happen, it was better to err on the side of caution, especially with an athlete that had chronic pain.

I remember one athlete in particular who suffered from low back and hip pain. He was unable to put on his socks let alone tie his shoes. The trainers at the team would do this for him. The inability to perform such simple tasks originated from an injury suffered at the age of twelve. He fell off a slide onto his left back hip region. By the time he was in his senior year in high school he was unable to dunk and set out to become a 3 point specialist. In fact, that was his trademark when he broke into the league from college. When the athlete was 31 years old, I was contacted by his team to help with his chronic injury.  Taking a case history the athlete often referred to how stiff he felt, walking as if he was “John Wayne” (a cowboy actor who had a very distinct walk like someone who had little freedom in his hips). After my initial assessment, I requested that he be removed from all pain medication. I started working on him three days later in order to make sure there was no pain medication still in his body.

In the first session, I started educating him on the microStretching technique and what to expect. I also laid out the plan of attack and requested his full co-operation. That was not so difficult since this was his last chance to continue playing in the NBA. With the trainers and the athlete on the same page, I began my treatments. My belief was and continues to be not to focus on the injury at hand but to focus on the muscles that have compromised their function in order to “support” the injury. This includes muscles on both side of the body as well, not just the injured side. The muscle groups’ treated were the calves, the ITBs, the quads, hamstrings, hip flexors as well as muscles of the mid-back. It may have been a circuitous route, but after the first session he was able to bend over and attempted to put on his socks. Though there was a bit of  a struggle he managed to get his socks on with less stress and strain. We continued the work for three to four weeks whereupon the athlete had a surprise for me. We went out to the basketball court and he proceeded to dunk the ball. The last time he did this was in the year prior to his senior year in high school. This athlete remained in the NBA for another three years and retired not because of an injury.

For those who are not versed in microStretching, it is a low intense stretching technique focused on relaxing the nervous system. This relaxation removes the tension from the muscle, stimulating a parasympathetic response which in turn allows the muscles to relax.  The Intensity of the stretch is about a ‘three’ or ‘four’ out of ten. It feels similar to placing your hand in “lukewarm” water. Remember, you do not want to cause any pain or discomfort. The stretch is held for 60 seconds and it is repeated three times per muscle group at least once per day. The take home message is that proper recovery and regeneration involves not stressing the body to the point of pain and discomfort. In other words, you will make the greatest gains by being gentle!